In the summer of 1951, Dave Brubeck formed his first quartet.  With Paul Desmond as a constant on alto sax and Herb Barman holding down the drum chair, bass players came and went.  Two bassists that stayed long enough to get recorded with the group include Fred Dutton (who also doubled on bassoon) and Wyatt “Bull” Ruther.  The Dave Brubeck Quartet, or Dave Brubeck and His Trio as they were still occasionally billed, garnered a lot of attention through their live appearances at clubs up and down the West Coast.  Brubeck had previously recorded his trio with Fantasy Records, an independent record label based in San Francisco, CA, and now Fantasy began to record and release the first offerings from Brubeck’s quartet.

Released initially by Fantasy as a series of 78rpm 10-inch shellac discs (Fantasy 517, 518, 519 & 520) in late 1951 and early 1952, these recordings represent the first offerings from the Dave Brubeck Quartet.  Fantasy grouped these early recordings together and released them as a 10-inch record in 1952.  Pressings were made on black vinyl as well as on translucent red and blue vinyl.

Originally released on 12-in vinyl. These historic bootleg recordings represent the earliest live recordings from the Dave Brubeck Quartet, capturing the group on their first appearance on the East Coast.  The Birdland tracks are allegedly made up of two broadcasts, the first three from 15 December and next seven tracks from 22 December.  If true, this album neatly contains the music heard on their opening and closing nights during their initial week run at Birdland jazz club in New York.  The last two tracks are from two separate radio broadcasts from Boston’s Storyville jazz club.  These tracks were initially released on bootleg records and then as CDs.  The original source is most-likely Boris Rose’s collection, as the ‘Alto’ record label was his. 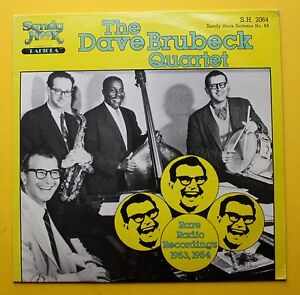