Here at Raggy Waltz, we’re open about our rather biased approach to record collecting and listening.  West Coast is the best the coast.  Prestige and Blue Note albums are constantly pontificated on amongst most jazz record collectors, so why continue the trend here if you can read it elsewhere?  Long live Fantasy, Pacific Jazz, and Contemporary Records!!!  Well, even a hardened West Coaster like myself has to admit that Prestige and Blue Note albums are… well, they ARE pretty good albums (Ok- great albums) and deserve some respect.  From the latter record company, this album is a sterling example of such an album.  Enough preamble- to the music!

As much as the word “classic” is over-used, this is one of those classic albums, down to the cover art.  The music on the grooves of this record is both emblematic of the times it was recorded yet timeless in its appeal and relevance.  It’s as fresh in 2018 as it was in the mid-1960’s.  It’s an unexpected musical ride, at the very least.  From the very beginning, the voices are front and center, blending together to create that instantly recognizable ‘gospel choir’ sound.  The recording date was a star-studded affair.  Besides Donald Byrd, Hank Mobley, Kenny Burrell, and Herbie Hancock were all present on one date.  Mercy.  Butch Warren and Lex Humphries were regulars in the Blue Note studios, and I admit to not being too familiar with Donald Best’s work on the vibes.  After listening to this album, I will definitely be looking out for him.  The tune from the album that tends to get the spotlight and that was a minor hit is the very unjazzy “Cristo Redentor”, which opens side 2.  If jazz had been around during the days of Gregorian Chants, this is what it/they would have sounded like.  Which really isn’t a bad thing, honestly.

On Donald Byrd’s original tune and the album opener “Elijah”, the voices are literally the very first thing you hear.  Initially they sound mournful and serious, but as soon as the rest of the band jumps in, they take on a more sassy, up-beat vibe.  Wordlessly providing accents, chants, and backgrounds, the choir compliments the musicians rather than ever taking center stage other than at the beginning.

Kenny Burrell takes the first solo, establishing the two-chorus solo format for the rest of the guys on the date.  At first, you’d think his guitar would get lost in the mix, but his joyful guitar comes through strong.  Donald Best continues the simmering setting Burrell had set with a strong, cool solo with his vibes.  When I first listened to the album, I was a little skeptical as to how a vibraphone would fit in with this type of music and setting.  After all, the vibes are by their nature a rather cool-toned and understated instrument (unless Lionel Hampton was behind them).  How could such an instrument possibly mesh and naturalize itself in a gospel, churchy setting?  Donald Best aptly shows how.  I still don’t know exactly HOW he did it, but he makes the vibes in the context of a soulful gospel tent-meeting sound like the most natural thing in the world.  Hank Mobley follows with his own buttery-smooth two choruses.  So far, the music has simmered along, and when Donald Byrd steps up to the mic, the simmering continues.  None of the soloists play a flurry of notes or rely heavily on the blues scale like one would be tempted to do in such a setting.  In fact, they do the exact opposite.  They instead choose to build off of the music’s intensity while constructing relatively simplistic solos.  Byrd’s trumpet solo is particularly introverted, quite possibly playing the least amount of notes of all the soloists.  In contrast, Herbie Hancock plays a much more extroverted piano solo much more in line with the musical setting.  The ensemble comes back to play the melody again, and the tune is over.  The rest of the album is in much of the same vein, with the choir adding their wordless voices to the music to create a solemn, reflective, yet sunny album of jazz.

Plenty of critics and fans have waxed poetic about the implications of the album, or the “new perspective” the music commanded (SO clever and original!), but I prefer to let Mr. Byrd speak for himself.  Well, him and Mr. Hentoff.  Nat Hentoff wrote the liner notes, and while they’ll be discussed on their own in a minute, I particularly like what he wrote concerning the unorthodox use of a gospel choir:

“It’s important to note, however, that this is indeed A New Perspective (even Nat couldn’t help himself) in terms of a jazz approach to the Afro-American religious heritage.  This is not a tongue-in-cheek, oh-how-soulful-I-am session.  Nor is it an attempt to somehow mix old time religion, rhythm and blues and stomping jazz into a hopeful ride on the best-selling charts.”

As for Donald Byrd, he kept it succinct:

“I mean this album seriously”.

Another word that tends to be over-used is “iconic”.  However, that is exactly what this album cover is.  Yet another display of the artistic talent of Reid Miles, this album cover is one of the more famous and recognizable examples of the ‘Blue Note aesthetic’.  A provocative black and white photograph of the actual musician, caught in the action of doing something hip, from an artistic…perspective (I couldn’t resist, either).  Donald Byrd is chillin’, leaning on a (his?) Jaguar E-Type circa 1963, with a still-stylish heavy knit sweater.  His facial expression and body language as a whole exudes relaxed, effortless hipness.  “Oh, hey there.  I didn’t see you down there in front of the sleek hood of my Jag.  You have a camera?  Go ahead, I’ll wait.”

The use of color in the title is tasteful as well.  All around a phenomenal example of a jazz album cover done all the way right.  In the vernacular of the cool kids, this cover has the drip.

Oh, and if you wanted to actually see what a complete Jaguar E-Type looked like in 1963 and not just the light and hood, here you go.  Donald Byrd didn’t have to flex on us like that.

Seeing Nat Hentoff’s name under the liner notes to an album is almost always a good sign that 1.) you picked up a solid album and 2.) you’re going to learn at least one new word.  Both are true in this case.  The music is solid and two sentences in, Hentoff casually throws in “corollary”, which means “a proposition that follows from (and is often appended to) one already proved.”

The man could write and had a way with the English language.  His descriptions of the soloists is characteristically descriptive.  From “buoyant and mellowly joyful” Kenny Burrell to Donald Best the “resourceful vibist”, to the “preacher-like solo” of Hank Mobley, to the “assurance and contagious warmth” of Donald Byrd, to finally the “emphatic”, “increasingly forceful and personal” Herbie Hancock.  Perfect.  I’m almost sure 99% of you readers don’t actually take the time to read the liner notes on these albums, but I always encourage you to read the liners if Nat Hentoff wrote ’em.  They’re like perfect essays. 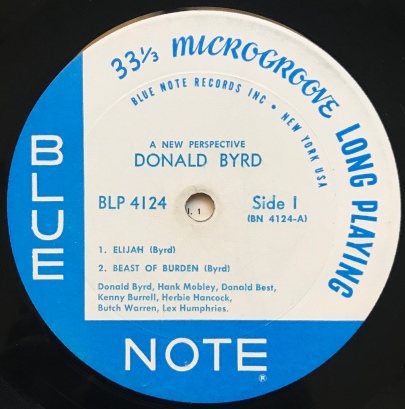 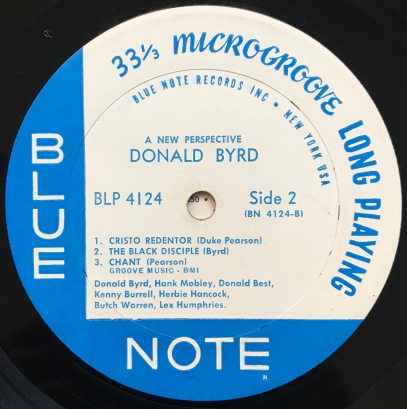 There’s just something about the labels of Blue Note albums that is so refreshing and beautiful that just can’t be found on anywhere else.  Perhaps it’s the cheery blue and the crisp white combo, or the font choices?  Whatever it is, I love looking at them.  Having been released either just before JFK was shot in November 1963 or in early 1964, the vinyl isn’t deep groove.  The labels are classic NY Blue Note labels, and the Plastylite ‘ear’ is in the runnout wax, along with Rudy Van Gelder’s stamp of approval.  This is a mono copy, and as such, the music has a front and center presence.  Nobody is off to the side of the studio hiding.  The record was definitely loved and well-listened to by its previous owner(s), as the multitude of physical evidence on the album jacket and the vinyl itself readily shows.  It’s all seen better days, but it still sounds good with that classic Van Gelder Blue Note sound.

On trip back home to Southern California a few summers ago, I made a stop in what is now Redlands’ only record store and peeked around.  Lots of expensive vinyl that didn’t really seem all that justified.  You know it’s bad when they’re charging more than $10 for a copy of Ramsey Lewis’ ‘The In Crowd’.  Nevertheless, I pressed on, and was surprised when this album peeked out at me from the bins.  It couldn’t be a real Blue Note, I thought.  Yes, it was.  I checked the price tag which was stuck directly on the album cover (ugh).  $10?!  It must be a reissue or something.  I checked the vinyl itself.  Nope, it was an original pressing.  Hmmm.  Must be something wrong with it.  There were no scratches or anything that I could see.  Being as my record player was two time zones away, I’d have to chance it.  I’m glad I did.  There’s some groove wear, especially on the album’s most popular tune “Cristo Redentor”, but for $10, I don’t mind one bit.