After a lengthy spell of no posts, I found some time to write.  I won’t say free time, because if I do, an assignment will suddenly appear.  While sitting in a particularly boring lecture the other day, I began to think about Paul Desmond’s public and private spats with drummers in Brubeck’s quartets.

Radio personality Willis Connover once called them the ‘Gestalt Four’, recognizing that Brubeck’s group relied heavily on each other to produce and create something bigger than themselves individually.  In reality, this relationship between the members was a lot more delicate than many people knew.  Paul Desmond was rather particular when it came to how he wanted drummers to sound.  This attitude occasionally flared up and even threatened to break the quartet up at numerous points.  Lester Young famously quipped that he liked drummers that played with him to just do a little “tinky-boom”, which is to say he didn’t like his drummers to be too busy behind him.  He had no shame telling his drummers this to their face, as he did here on live television in 1958.

Paul Desmond agreed with Lester Young’s model of how a drummer should be, and when the drummer went above and beyond this model, Desmond could get upset.  In an interview with Paul Caulfield in 1991, Dave Brubeck mentioned an instance when Desmond got annoyed mid-performance by something the drummer did.  “I remember there’s one recording out where Paul got mad at the drummer and I said to the drummer, “Pay him no mind.” You can hear it right on the LP…”  Brubeck goes on to explain that he ended up playing a marathon piano solo in order to prevent them from fighting afterwards.  The recording was released by Fantasy Records in the mid-1950’s, sourced from a March 1954 appearance at the University of California Berkeley.  Joe Dodge is on drums and Bob Bates is on bass.  Listening to the track today, it’s hard to understand what Joe did that caused Paul to get so incensed that Dave had to say something.  Joe plays a figure that ends with loud punch of the base drum to conclude Paul’s musical phrase.  Paul apparently didn’t like that, yet it’s rather humorous to hear Joe give the base drum another kick after Dave tells him to ignore Paul’s disgust.  The fun begins at the 50-second mark, at the beginning of Paul’s phrase that Joe concludes on his kit.  Brubeck’s comment happens around the 1:05-mark.


Despite this public display of disaffection, Paul has said that Joe Dodge was one of his favorite drummers.  Dodge quickly molded himself to Desmond’s ideal drummer, using a spare drum kit that consisted only of a base drum, a snare, a hi-hat, a ride cymbal and his unique ‘Chinese’ cymbal.  Dodge frequently used brushes, and even when he was using drumstick on the cymbal with one hand, he had a brush in the other hand to make quiet accents.  Paul had found his tinky-boom…

Until Joe Dodge decided to leave quartet.  Desmond recommended another drummer named Joe, this time with the last name of Morello.  Desmond had listened to him perform with another group and thought he was getting the perfect tinky-boom drummer.  Unbeknownst to Paul, Morello was trying to get away from quietly playing with brushes.  He wanted to be featured, and told Brubeck as much.  Brubeck agreed, and on the first night Morello gigged with them, Brubeck featured Joe.  His drum solo received an ovation from the audience.  Paul was livid.  After years of being billed as ‘The Dave Brubeck Quartet, featuring Paul Desmond’, Paul was not ready or willing to share the spotlight with a drummer.  Despite Desmond’s threats to leave the group unless Morello was fired, Brubeck kept Morello.  Desmond stayed, but there was friction between him and Morello for years.  Where Lester Young would have told a drummer “just a little tinky-boom”, Desmond told Morello “please don’t do adventures behind me”.

Joe Morello joined the group in late 1956, and in 1958, when the group was off to Europe for three and half months of tours, things were still rough.  In personal letters that Desmond wrote, he quipped that it was now the “Joe Morello show”, illustrating his disdain of Morello’s presence on drums.  While there is recorded evidence that Paul was in fantastic form during parts of the European tour, there are also recorded instances where Paul’s frustration with Morello may have become evident in his playing. 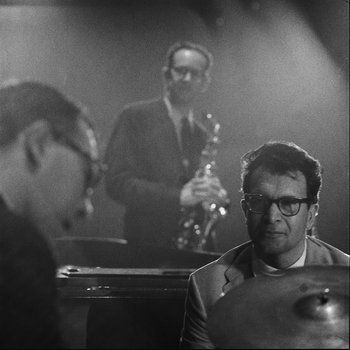 For instance, there’s an interesting performance of ‘Take The ‘A’ Train’ from a February 28 concert in Hanover, Germany where Desmond sounds less than enthused.  The entire concert as a whole finds Desmond sounding rather lack-luster, but on this track, Desmond is particularly distant, sounding uninterested and tired, merely throwing things out of his horn.  He seems to quote ‘Mack The Knife’ during the bridge at the beginning between Brubeck’s playing, a somber barometer of his feelings considering the lyrics.  He chooses to play his solo in a minor key, indicative of his attitude.  Towards the end of Desmond’s first chorus and into his second, Morello begins to play a complex latin rhythm on top of the swinging rhythm already in place, causing Desmond to get even quieter and even dropping out for a few bars.

It’s easy to imagine Desmond’s temper beginning to flare.  Morello and Brubeck can be heard talking during this brief period, with Brubeck giving an affirmative “yeah” to Morello’s drumming.  Morello ends the figure going into the bridge, where Desmond plaintively noodles around before picking it back up again as he heads into his third chorus.  Playing a quote of ‘Bernie’s Tune’ at the beginning of his third chorus, it seems like Desmond’s at least trying again, but then Morello plays heavy response on his drums, causing Desmond to drop down in volume yet again before finding a groove that carries him through.  It’s at the end of his third chorus that Paul hits the audience with his coarsest, dirty note on record, holding it for what seems like an eternity and letting it waver between right intonation and a honk before resolving it with a bluesy finish.  It’s a spectacular display of emotion that doesn’t appear anywhere else on record that I’m aware of, and gets Brubeck’s approval (“yeah Paul”).  In the context of Desmond’s entire solo, I wonder if that wail of a note was more about Desmond’s disgust with Morello than a tasty way to wrap up a chorus.  I’m inclined to think the former.  Desmond finishes his solo in a way that sounds like he was slinking away from the mic and back to the crook of the piano.

Interestingly, Brubeck called the tune ‘Out of Nowhere’ after this track, a song that Desmond loved.  Brubeck has said in interviews that he would do things to keep the guys happy in order to keep things from boiling over.  Could it be that Brubeck called one of Desmond’s favorite songs in an attempt to appease Desmond after his obvious annoyance with Morello on the previous song?

Throughout the ensuing years, Desmond and Morello eventually reconciled, becoming close friends.  The road was rocky though.  During Morello’s solos, Desmond would occasionally leave the stage and read a book in the wings.  He joked that he wrote ‘Take Five’ as a way for him to have a cigarette break in the middle of a concert.  Considering how he felt about Morello’s drumming, I wonder if, underneath Desmond’s many jokes about his song ‘Take Five’, there was a hint of contempt that the only song of his to become a huge hit was one that contained a long drum solo.  Later, Desmond and Morello were both able to kid each other about their once-fervent animosity towards each other.  One example comes from a CBS TV special from 1961.  Walter Cronkite interviews Dave and the cameras then capture a practice session.  After running through a number that later became ‘Castillian Drums’, Morello asks Desmond if he “played too many things”.  Desmond quietly answers “no”.  It happens at about the 13:53 mark.

A year later in 1962, Desmond returned the favor.  The quartet was in Australia, and while performing on a TV special there, they listened to a recording of themselves as Brubeck introduced the members to the TV host.  During Morello’s solo, Desmond flashes his Cheshire Cat-smile and tells Morello that his solo was “fine”.  You can catch that at the 1:12-mark.

Obviously, if they felt open enough to gently chide each other about it on television, they had finally reached a level of civility and respect.  Desmond continued to make disguised and not so disguised remarks about Morello’s influence on the quartet throughout the 1960’s, his most popular one being how you can tell who he is in the quartet.  “You can tell which one is me because when I’m not playing, which is surprisingly often, I’m leaning against the piano”.  After reading about Desmond’s strong feelings about drummers and Joe Morello in particular, it’s neat to hear it and see it, as best we in 2017 can.  I’ll end this marathon of a post with a humorous interview with the man at the center of Desmond’s frustrations:  Joe Morello!  Here he is, explaining the first uneasy months with him in Brubeck’s group in colorful detail.

3 thoughts on “Desmond Vs. Drums, or Adventures in Tinky-Boom”