As the liner notes say, this was the first recording Max Roach made after the tragic car crash that killed his star trumpeter Clifford Brown and his pianist Richie Powell.  Having formed a new group, Max entered the studio with a new lineup of men, all established musicians in their own rights.  Sonny Rollins was (and still is) a giant on his instrument, and Kenny Dorham had spent time with Art Blakey, among others.  Ray Bryant was a concise, swinging pianist, and Morrow was a hold-over from the original Max Roach Quintet.

The album is classic hard-bop jazz, swinging hard from start to finish.  The maiden track, George Russell’s ‘Ezz-thetic’, has a wild melody but when the musicians start to solo over the changes, the song’s harmonies reveal it to be ‘Love For Sale’ in disguise.  The last song on the first side, ‘Just One of Those Things’ is one of the fastest jazz songs I’ve ever heard.  It almost ceases to swing it’s so quick.  The tune above, ‘Mr. X’, is more leisurely, and everyone gets a chance to shine with a solo.  It’s a great introduction to Max’s new group and a great example of the hard-bop sound in its infancy. 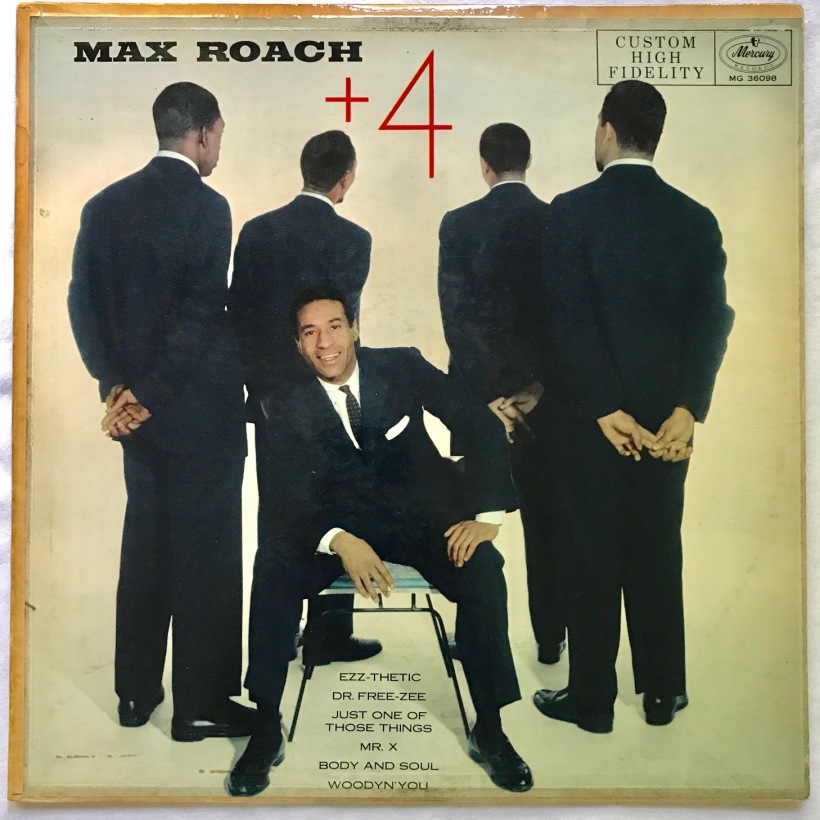 What are they looking at?  Why don’t we get to see the sidemen?  I get it- Max Roach is the leader, and the other guys are just the “plus four”, but having them face away from the camera sure drives home the point that they aren’t that important.  Sonny Rollins was a major figure in jazz even in 1956, yet all we get his back.  Heck, when you look at the backs of these guys, they could be anybody.  Is that John Coltrane on Max’s far right side?  Is that Percy Heath in front of John Coltrane?  And is that Sonny Rollins or John Lewis on the other side?  We’ll never know for sure.

The placement of the song titles is rather interesting, too.  The album title is artfully placed, though.  All in all, the album art is a misfire.  I can appreciate what the art director was attempting, but he/she missed the mark.  At least it’s in color, which in 1956 was an artsy move in itself.  The album cover used for the modern-day CD release of the material from this album and other sessions with the ‘plus four’ group would’ve made a better album cover.  Taken at one of the sessions that made up this album, it’s definitely a bit more edgy and down-to-business and shows just as much of the sidemen as the original cover art.  Extra points for it almost being 4:00, extra extra points for Max wearing his sunglasses indoors.

The thing about collecting old records is that they’re old records.  As such, unless you get lucky or have money, the records you collect show the signs of their age, and this record is a good example of that.  Released in October of 1956, it’s survived 60 years in relatively great condition, but the back of the album, printed on plain old un-laminated cardboard, has yellowed and browned with time.  It’s still readable though, and the liner notes, written by A. Nana Moose, are informative if not perfunctory. 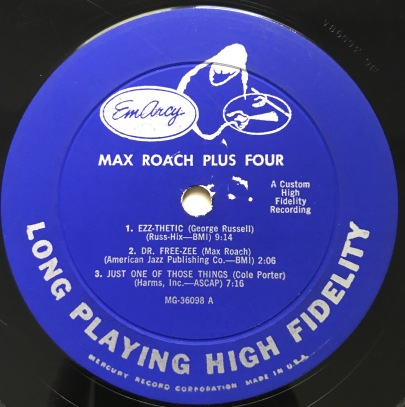 This is an original record with the classic EmArcy labels, on deep-groove vinyl.  EmArcy was the Mercury label’s jazz division, and continued to release records into the 1960’s.  The vinyl plays pretty quiet, but the sound quality is rather bright, tinny, and compressed.  Listening to this album in remastered stereo, the sound is much wider, clear, and life-like.  I’m not sure if that’s just 1956-era vinyl pressing or what, but it’s interesting just the same.  The mastering of the record was done by the same person that wrote the liner notes.

I found this album at the local record store during a quick visit after class one afternoon.  This was an album that frequently showed up on my Pandora music stations, so I quickly nabbed it.  The $10 price tag put the record easily within my student budget, so homeward bound it went.