If there’s one thing anybody who knows me (or anybody who doesn’t know me but lets me talk to them long enough) is aware of, it’s that I’m a Californian through and through, despite my temporary residence in Alabama.  One thing that Alabama has that California does not is seasons, and after suffering through another bleak winter, the weather is warming and the leaves are coming back on the trees.  In celebration of the turning season, I thought it would be cool to dedicate each post this month to the first full month of spring, April.

‘I’ll Remember April’ is among my personal favorite jazz standards, and Erroll’s interpretation of it is rather unique.  He lengthens the song’s form by adding another verse at the end where ordinarily the song would go to the bridge, inserting a turn-around and then repeating the first 16 bars of the song, stretching what was originally a 48-bar song to what on paper is a whopping 64-bar song.  The added verse works though, and I’m surprised other musicians haven’t explored this form of ‘April’, at least on record.  Garner’s piano playing had swing built into it; his left hand’s strolling four-to-the-bar chording gave the impression that he had a guitar strumming with the group, and his occasional accents really kicked and jumped the music into some in the pocket grooves.  Another interesting thing about Garner’s performance of  ‘April’ is his convoluted introduction of the tune itself.  He frequently improvised intros to songs that had little resemblance to the song he was about to play, keeping the audience and his sidemen in suspense until the moment he began to play the melody of the tune.  When he does finally begin to play the melody here, the audience erupts into applause.  ‘Red Top’ is a neat little blues outing that finds Garner in a humorous mood, throwing quotes in his solo with abundance.

This live album came about by accident.  Garner’s agent, Martha Glaser, noticed a tape recorder running backstage during the concert.  She tracked down the guy who was taping the concert, and about a year later in 1956, Columbia put out selections from the concert on this LP, to a smashing success.  It’s not a rare album in the slightest, and it’s not a highly sought after record, either. It’s a solid album, though, with swinging and stimulating performances throughout.  As an added bonus, we get to hear Erroll Garner speak, in what the liner notes describe as ‘the most succinct curtain speech’ ever. 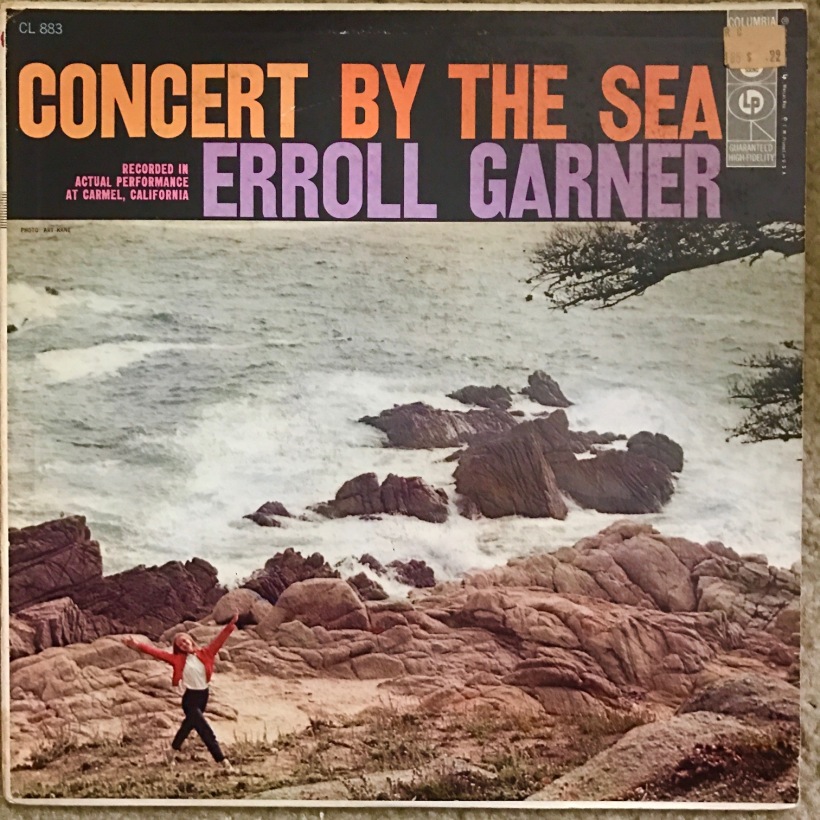 It’s not a bad cover, to be honest.  You definitely get a sense of being ‘by the sea’, and the use of color in the font is tasteful.  Composition-wise, the photo perfectly uses the Rule of Thirds (photographer jargon for aesthetically pleasing balance), putting the woman off to the bottom and side and using the tree to almost frame the photo.  In fact, the use of leading lines (the album title to the pine tree to the rocks in the background to the rocks in the foreground to the girl) makes for visually engaging cover.  Why just a B rating, then?  I’m glad you asked.

A Tale of Three Covers

In 1956 when the album initially was released, the art department decided to use a white model on the cover, a practice that was common back then.  The consensus among the executives was that a record wouldn’t sell if it had a negro prominently displayed on its cover.  Quick sidenote- according to an established white author and poet who lectured at my university yesterday, this sentiment was alive and well as recently as 2010.

The cover used in 1956 and on all subsequent pressings of the record had the white model in what I’m sure was then-fashionable black pants, a white shirt, and a red jacket.  In case you don’t want to scroll back up, here it is.

In 1969, Columbia decided to re-release the album in a ‘electronically re-recorded to simulate stereo’ edition.  Most record collectors know to run for the hills whenever they see a fake stereo album; I have this edition of the album, and I can say that fake stereo albums are best left alone.  More on that later.  The album cover on this edition features an updated photograph of the original cover.  That is, a more boring cover.  The font is a droll white that almost gets lost in the equally droll and gray scenery.  The model is again a white woman, and in a reflection of the times the photo was taken, she is garbed in bell-bottom pants, the red jacket replaced by a different red top, and long flowing hair.  Goodbye quaint 1950’s, hello psychedelic ’70’s.

In 2015, Columbia/Sony released the entire concert, blessing the world with 11 previously unreleased tracks in addition to more stage announcements.  The cover art on the CD and vinyl jackets is subtly historic, if not tongue-in-cheek.   The multi-colored fonts are back, and it sports an updated subtitle that tells us specifically when the proceedings were recorded.  The historic nature of the cover comes when you look at the actual photo.  Sixty years after the album came out, Columbia finally thought it was safe to use a black model on the cover.  Dressed in a red shirt and black pants, hands outstretched, and standing on the rocks (albeit on the opposite side), the 2015 cover is both a tribute to the original and a quiet monument to where we are today.  I say quiet, because nowhere in the extensive new liner notes or anywhere else online for that matter does Columbia/Sony mention this change in models.  The kicker is the black model is wearing her hair au natural.  Amen and amen. 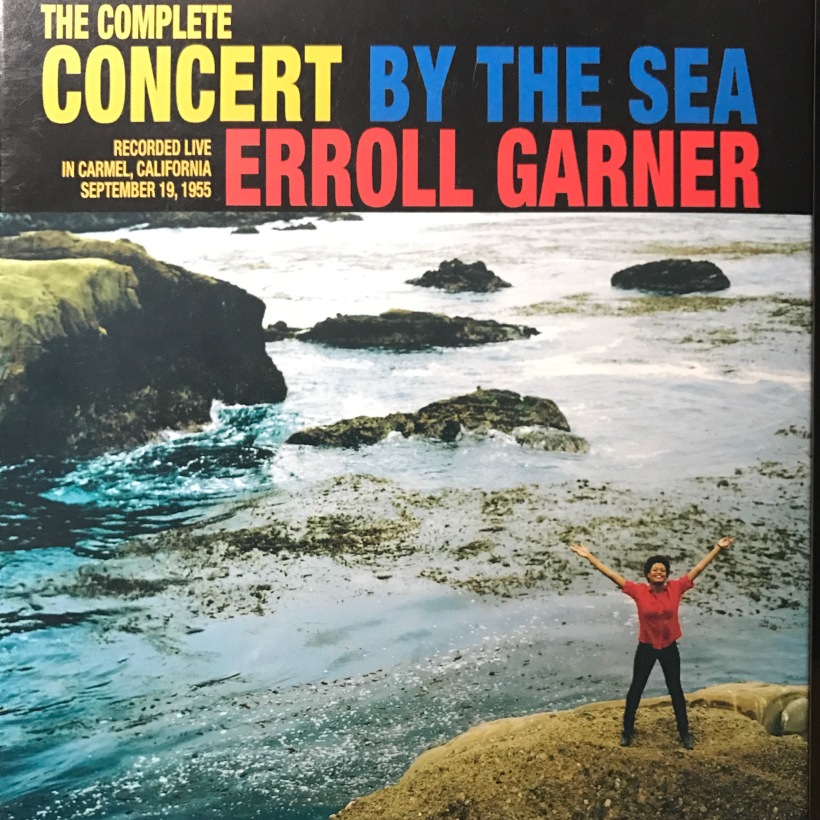 And that folks is the sixty-year tale of three album covers and why I gave it a ‘B’ rating.  By the way, on the back of the CD booklet, the model seems to be holding something in her hand…

Yet another example of the wrong kind of autograph.  Despite being sixty years old, the white back cover is still pretty bright. 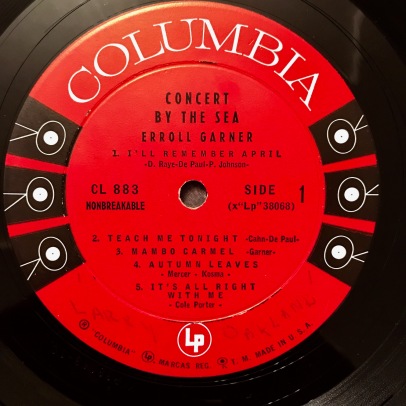 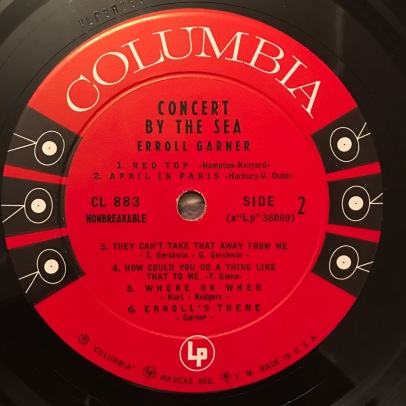 Columbia 6-eye mono labels on heavy deep groove vinyl.  The matrix numbers end with 1C on side 1 and 1A on side 2.  Normally I don’t really care about this, aside from general amusement at where in the pressing process my record came from, but in this case I admit that I have slight case of ‘1st of the 1st Syndrome’.  Being that this record had sold millions of copies by the end of the 1950’s, it’s kinda neat to know that this particular record was among the very first pressed and released.  To get an idea of how many copies were pressed and mastering tapes used, my 1969 copy of this album on fake stereo has matrix numbers ending in 4B and 4D, signifying that the tape used was the 4 times removed from the original.  It sounds terrible.  The original album was sourced from an amateur bootleg recording, so the sound was already low-quality.  Add electronically simulated stereo, and you can guess what the end result is.  Interestingly, it sounds like the tape speed was sped up, giving the impression that music is being played faster than 33 1/3 RPM.  Here’s the original rip from my record from above, and then the rip from my 1969 copy of the same album, same track.  The difference is night and day.

Sometimes you find gold in the most unexpected places.  Such was the case with this album.  While working at a summer camp in a small town in the mountains of Arizona, some friends decided to visit the Goodwill Thrift shop down the road.  I went along for the ride, and was pleasantly surprised to find that not only did they have a decent-sized record section, but everything was 99 cents!  I quickly scooped up this and two other records , one being the famous George Shearing/Nat King Cole record.  Incidentally, the original record’s price tag is on the front cover; it went for 99 cents in 1956, and I bought it for that same price in 2013.  How about that?