Ah, Cal Tjader.  My favorite vibraphone player and a fellow Californian.  A drummer-turned-vibraphone player, Callen Tjader originally got his start playing drums in Dave Brubeck’s Octet and Trio in the late 1940’s.  By 1951 he was on his own and playing a Latin jazz/cool jazz hybrid that proved immensely popular.  This album, made in 1956, was in the Latin, Afro-Cuban bag.  For some reason, in spite of Cal’s popularity throughout the 1950’s and 60’s, almost none of the current jazz authors seem to mention him.  In fact, it seems as if they do the opposite and purposely ignore him.  The same goes for jazz record collectors.  I just don’t see his name pop up much.  I wonder if its the age-old bias against the West Coast, ‘cool’ jazz school of music that causes everyone to snub Cal Tjader, or perhaps it has to do with Cal’s fascination with Latin jazz, which some don’t consider jazz at all.  In Ted Gioia’s fantastic book ‘The Jazz Standards’, I would’ve thought that Cal’s version of ‘Lullaby of Birdland’ would have been included, but I was wrong.

All the tracks are good, but ‘Lullaby of Birdland’ is my personal favorite.  That swaggering, head-bobbing opening with Cal’s vibes before the famous melody is stated is the epitome of hip.  In my opinion, out of the many many versions of this George Shearing classic, I vote Cal’s version as THE coolest and the most original.  The tempo change for the bridge is a nice touch, and the many key modulations leading to the double-time middle section make for an engaging arrangement that must have had everyone dancing when Cal’s group performed it live.  Overall, it’s a great example of how a jazz standard can sound with a Afro-Cuban accent.

A quick word about the second track; did you catch the last bit of Cal’s solo? If it sounded familiar, play the first track again…

One of the great things about collecting vinyl is the great artwork that comes with it, and this album is a great example of that.  The cover art on this album is rather simple yet quite expressive of what kind of music (and mood) is captured in the grooves of the enclosed record.  The colors, the design, the font and positioning of the words, and even the plain white (well, it was white in 1956 when it was made, not the off-white of 60 years it is now) background are all evocative and rather modern.  Aside from slight peeling and fraying, the cover is VG+.

Always nice to have an autograph, but it would be nice if was actually Cal Tjader’s and not a previous owner of the record.  For a Fantasy album, the liner notes are surprisingly complete.  Fantasy Records was notorious for their cavalier manner of operation, and their liner notes often left out such important information such as the musician lineup, dates of recording, even the names of the songs.  On this record we get 2 1/2 outta 3 (the spring of 1956 is awful vague), I’m not sure that “O’Higgins” isn’t just Ralph Gleason in disguise. 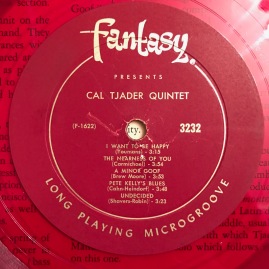 Fantasy albums in the 1950’s and 60’s came in wild shades of translucent colors, from purple and green to red and blue.  By the mid 1950’s, the colors were limited to translucent red pressed on heavy plastic.  Pretty groovy if you ask me.  My album is an original first pressing Fantasy from 1956, deep groove on heavy dark red plastic, Fantasy 3232.  The fidelity is decent for a pre-1958 mono record, with occasional snaps and crackles, yet the music comes through clear and mostly without a hitch.  I’d give it a VG to VG+.  This record seems to be rather uncommon, and downright hard to find in mint or excellent condition.  I guess Cal Tjader is a lot more popular than most jazz books would have one believe.

This was one of the earliest records I actually had to bid for on eBay.  Every now and then, I really start to dig a particular artist, and back in late 2014-early 2015, I was really into Cal Tjader’s output from the 1950’s.  The starting price was $9.99, and like the blissfully ignorant chump that I then was, I happily bid that price.  Someone else then bid $11.  A small bidding skirmish ensued that lasted for almost an hour.  As a college student, I wasn’t trying to pay more than $20.oo for it, excluding shipping, but it was at $15 with no one backing down.  Luckily for me, the other person quit at $19, and I experienced my first win at an eBay auction.  Ah 2015.  It was a simpler time then.