Miles Davis.  What’s there to be said about Miles that hasn’t been already said?  He was a cool dude who played an even cooler trumpet.  Throughout his nearly fifty-year career, Miles touched on and explored numerous styles of jazz, from bebop in the 1940’s to a fusion of rock, electric, and jazz in the 1970’s.  This album finds Miles experimenting with like-minded musicians to create a type of jazz that was markedly different than bebop, which was then in vogue. Utilizing unorthodox instruments such as the tuba and french horn in a jazz context and balancing improvisation with written sections, the music the group created was startlingly different from anything being played in the 1940’s.  Billed as the Miles Davis Nonet, the group lasted about two years before dissolving, a casualty of being too innovative too early.

With a title as gutsy as ‘Birth of The Cool’, the cover art had to make the right impression, and man does this shot make an impression.  Photographed by Aram Avakian, this incredibly hip cover  depicts Miles himself in the midst of a recording session (for a much later Columbia album in 1956).  Miles has always been hip (sunglasses indoors? Hipsville), but during a time when black people were infrequently shown on album covers, this cover made a statement- “avant garde music is in this sleeve”.  The arrangement of the words is also noteworthy; they almost frame Miles, forcing one to focus on the artist.  As a clever twist, the only dash of color on the cover is the startling red lettering of ‘cool’, suggesting that though this music is cool, it’s smoldering too. 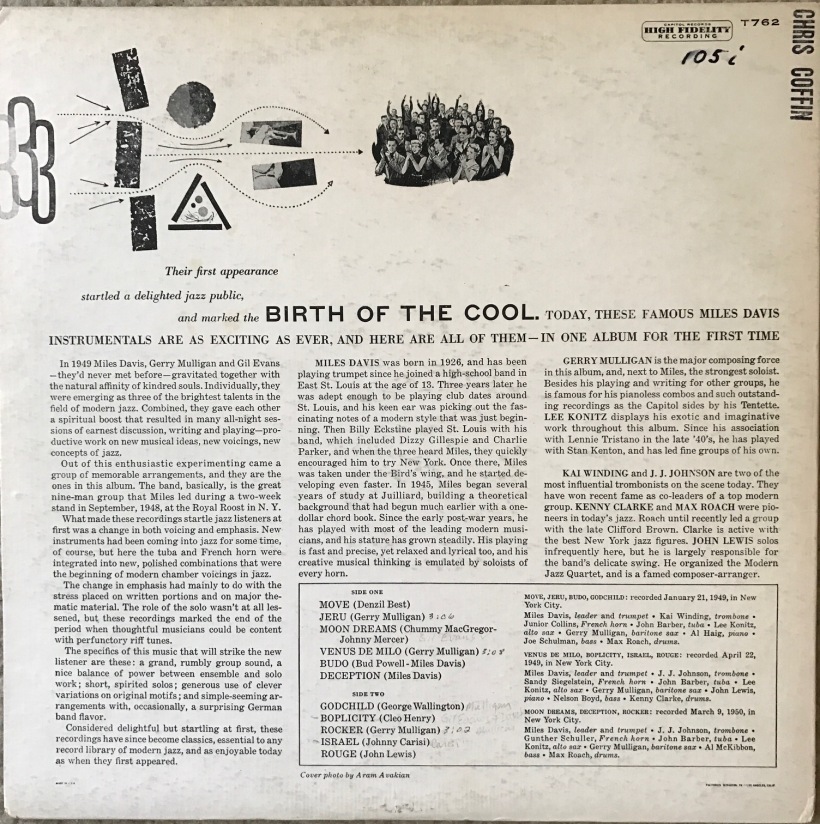 The record cover is in pretty good condition, with only slight ring-wear.  It’s always a plus when a 50-year old record still has white whites instead of brown or yellow whites. 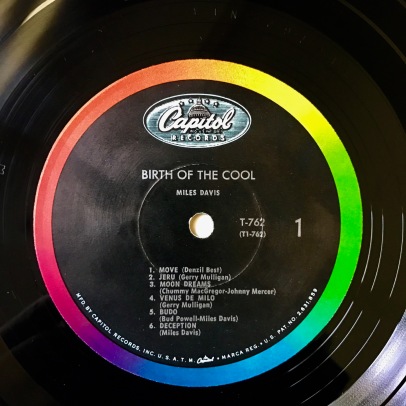 I find it hard to date Capitol records, as they didn’t seem to make very many copies of deep groove albums.  Information on the labels is scarce, but I was able to dig up some info that I hope is right.  According to friktech.com, the label on my copy was used from 1962-1968, meaning that my copy is a 50-year old reissue.  Well, a reissue of a reissue.  The original tracks that made up the ‘Birth of The Cool’ album were released in the late 40’s and early 50’s as 78rpm singles and 10-inch records.  11 of the tracks were released on one 12″ album in 1957 as ‘Birth of The Cool’, which became both popular and influential.  Apparently, it was still popular in the mid-1960’s when this reissue was pressed.

The Personnel (on the sample tracks above):

I chose the two tracks above not only because they’re smooth but because they illustrate the very things that made this group stand out like the red letters on the album cover.  The first cut, named ‘Jeru’ and written by Gerry Mulligan, employs dense modernistic (for 1949) chord voicings and written in such a way that sounds rich and full.  Also, during the bridge, the group goes into five bars of 3/4 time, a very radical move in 1949, when jazz waltzes were almost unheard of.

The second track, ‘Godchild’, begins with a tuba and baritone sax playing the melody in unison.  Although the tuba was used in jazz’s early days, it had fallen by the wayside by the close of the 1920’s and was all but extinct in jazz in the 1940’s.  Understandably, its appearance in such a setting was unusual, and despite its success in the Davis Nonet, the tuba rarely made appearances in jazz recording sessions after these sessions (a notable exception being the wonder kid Phil Draper in the late 50’s).

The general consensus is that these sessions kicked off (or…birthed) the cool jazz movement of the 1950’s.  Indeed, Gerry Mulligan and Lee Konitz became renowned for their work in this more cerebral jazz form.  Miles Davis and Gil Evans, who was the arranger for most of the tunes on the album, went on to make a string of popular albums for Columbia in the mid- and late-50’s.  In fact, nearly all the musicians involved went on to have more or less successful careers following their trailblazing performances on this album.

Every now and then, one lucks out and finds nice people who love vinyl just as much as you do.  I chanced upon such a person, who kindly gave me this album as a gift.  If you’re reading this, thanks.