It’s another soggy grey day here in north Alabama, and as such, out comes the reflective music.  Here’s a record I found during my cross-country tour this summer.  To the music!

The music on this album is near-perfect.  Continuing his fruitful explorations in the piano-less quartet format, the music is clean, paired-back, and all-business, representing some of the better ‘cool’-toned jazz being made in the 1950’s.  Gerry Mulligan was always a reliable swinger, and his full-bodied bari sax perfectly fills in the cracks in the music, providing a harmonic foundation here, a lyrical solo there.  Art Farmer’s beautifully warm, malted trumpet serves as a wonderful foil to Mulligan’s baritone sax.  Art Farmer is one of the only examples of breathy trumpet I can think of, quite a difficult thing to accomplish on a brass instrument.  Bill Crow, former bassist with Marian McPartland’s trio, flourishes in the spare arrangements and instrumentation.  His bass lines are impeccable, swinging, and melodic.  In the drum chair is long-time Mulligan collaborator Dave Bailey.  Half of the tracks find him tastefully knitting away with brushes, the other half keeping time with sticks.  He was a perfect drummer in the context of Mulligan’s smaller combos, keeping things moving without getting to busy, in the great tradition of solid time-keepers like Kenny Clarke.

The music flows smoothly in the well-programmed sequence of tracks, opening with the unusual choice of a ballad, the title tune of the album.  Arranged by Mulligan, as were all the tunes on the album, the song features some great ensemble writing, with some improvised solos throughout.  “Just In Time” has some tempo changes (fittingly) and trading solos where Mulligan and Farmer alternate choruses.  There’s some great blowing here.  There’s a couple of tunes written by Mulligan with a nod towards the Newport Jazz Festival.  The cleverly titled “News From Blueport” is a lazy blues in waltz time, while “Blueport” is a straight-ahead blues with a quicker tempo.  “As Catch Can” has the fleetest of all the album’s tempos, with some excitingly driving solos to match.  Of course, there’s a few throwbacks on the album, too.  “My Funny Valentine” was established as a jazz standard at the hands of Mulligan’s earlier treatment of the tune with Chet Baker, and gets a fresh examination by Art Farmer here.  “Utter Chaos” is another old tune from Mulligan’s partnership with Chet Baker, often played as a set closer during club dates.

The best tune on the album, however, is slightly noir-ish original by Mulligan entitled “Festive Minor”.  With Farmer’s cup mute firmly in place and the simple yet effective melody taken up as a round between the two horns, the piece conjures up images of a rainy, dark day in the city as a suited man in a trench coat slinks down the sidewalk.  It’s like the opening of a black and white detective movie from the 1940’s or 50’s.  Farmer’s muted solo sets the mood with a bluesy, spare opening.  His use of space and silence heightens the mood while Mulligan’s languid sax purrs rhythmic accents in the background to provide a harmonic framework as well as some propulsion.  After Farmer’s solo, Mulligan blows some of the most lyrical, achingly beautiful bari sax on the record.  The title, “Festive Minor”, is at first a contradiction.  How can one be festive and happy yet minor and slightly dark?  The tune proves how.  The fellas are obviously enjoying themselves, playing some inspired and hip jazz, all with a slightly dark accent.  Bill Crow has a chorus to blow some bass, then the horns come back sans mute to restate the beguiling theme.

You know an album is good when our friend Scott Yanow over at Allmusic gives it a full five stars.  While tempering his 10/10 rating by pointing out the album’s brevity, he conceded that the music was significant and noted that “[v]irtually every selection is memorable..”  Which is true.  This is one of those rare albums where you can play it through without feeling the urge to skip a tune.  Absolutely superb jazz laid down by four men with the sparest of instrumentations.  Like Don Draper once said, it’s simple, but significant.

An artistic, posed cover shot of an artist looking pensive and reflective isn’t new, but rarely does it actually match the mood of the music on the record.  It succeeds here, capturing both the album title and the music on the album.  The famous if not ubiquitous Burt Goldblatt is the photographer.  It’s a nice shot, utilizing light and shadows expertly to create a moody photograph.   The spare artwork on the cover is another way the cover art acts as a harbinger to the uncluttered music contained on the record’s grooves.  The album has seen better days, though, or hasn’t, to be more accurate.  It’s a victim of being stored in tight quarters with other records, without a protective album sleeve, and as a result has a worn patina with a faint ring of record wear.

Unfortunately, I suffer from a condition where things that should be serious are funny to me, and the longer I look at the cover, the more comedic it becomes.  Perhaps it’s because he looks like he’s on time out, perhaps it’s because he appears to be trying to figure out what else there is to say.  Either way, it makes me chuckle. 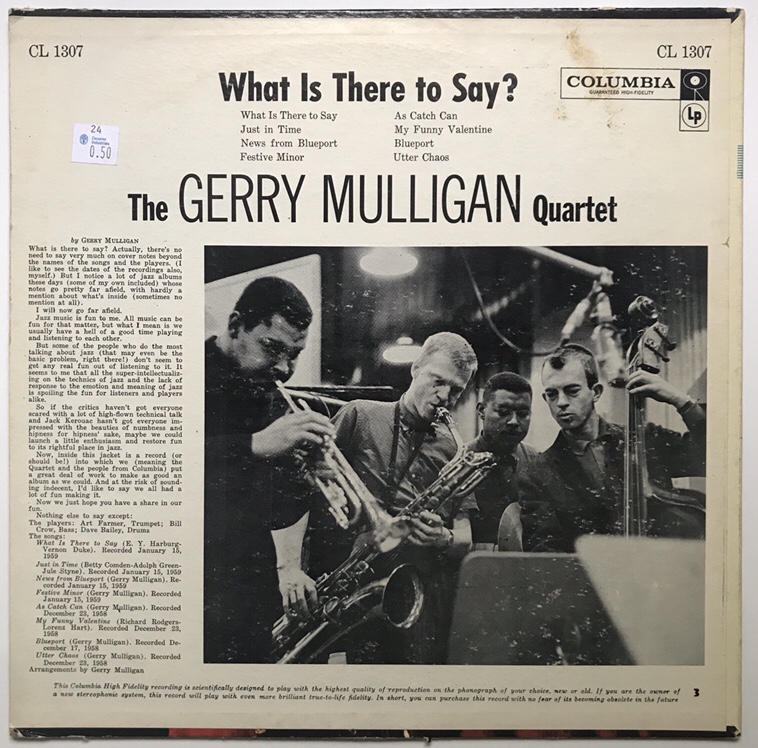 The liner notes, written by Gerry Mulligan, are quite entertaining and expressive.  This in spite of their succinctness.  In his brief essay, Mulligan mulls over the purpose of liner notes and what really needs to be said on the backs of albums.  After saying what he thinks is the only info really needed on albums (tune titles, personnel, and the dates the tunes were recorded), he makes some valid points of which most are still as valid today as they were in 1959 when he wrote them.

“But I notice a lot of jazz albums these days…whose notes go pretty far afield, with hardly a mention about what’s inside (sometimes no mention at all).”  I always hate that.  People who treat the back of albums like a college textbook, discussing all manners of the polemics of jazz and art and blah blah blah with barely a discussion about the music itself.  Mulligan goes on to indict those jazz writers who engage in such prose:

“But some of the people who do the most talking about jazz (that may even be the basic problem, right there!) don’t seem to get any real fun out of listening to it.  It seems to me that all the super-intellectualizing on the technics of jazz and the lack of response to the emotion and meaning of jazz is spoiling the fun for listeners and players alike.  So if the critics haven’t got everyone scared with a lot of high-flown technical talk and Jack Kerouac hasn’t got everyone impressed with the beauties of numbness and hipness for hipness’ sake, maybe we could launch a little enthusiasm and restore fun to its rightful place in jazz.”

Well-said.  He closes his liners by saying that he, his band, and the good people at Columbia put a lot of work into making this album, and how much fun it was.  What follows is a track listing with the recording date directly below each track.  The way it should always be.  More people like Mulligan should’ve written liner notes for jazz albums.

Because of Mulligan’s brief notes, there’s space for a gloriously large photograph of the Gerry Mulligan Quartet at a recording session in Columbia Record’s legendary 30th Street Studio in New York City.  I’m not sure what the brown smudge at the top of the album is, and I think it’s best that I don’t.  I tried to take the price tag off, but it began to take some of the cover with it, so it stayed.  The delightfully dated note about the mono record being able to be played on stereo equipment and thus never going out of commission is cool.  I mean, it’s not lying.  Almost 60 years later and it’s not obsolete yet! 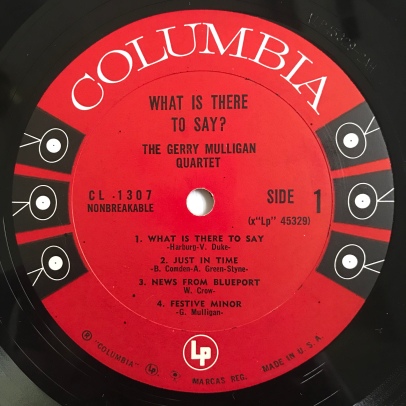 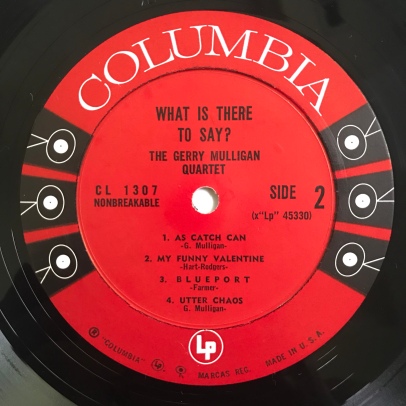 When done right, Columbia’s sound was unparalleled.  Their beautifully crisp, sonorous and life-like sound was famous even then in the 1950’s and 60’s.  Mono, stereo, 6-eye, 2-eye, it doesn’t matter.  Well, it kind of does, but that’s splitting hairs.  Pressed originally in 1959, the album used Columbia’s classic ‘6-eye’ labels, used for most releases in the mid-50’s thru the early 60’s.  My copy was a later pressing, as indicated by the runnout matrix codes of 2AH and 2AF, meaning a second master tape was used and was on its 32nd and 34th run.  All that means really is that this isn’t a brand-spanking new pressing.  The lack of a deep-groove shows it was probably a release from the early 1960’s.  Neato bandito.

Perhaps this is an indication for my increasing interest and fanaticism in collecting jazz records, but I actually like the mono pressing of this album more than the stereo version.  After having heard the stereo version online on Pandora and YouTube, the monaural version has more body, more bite, and more character, than the airy stereo.  Of course, this isn’t a very fair comparison, since I’ve only heard the stereo version online and not on a record.    At any rate, this record sounds fantastic, with barely a crackle or pop to be heard, and the fidelity is excellent for a 59-year old piece of vinyl.  The group is front and center, with the blessed acoustics of Columbia’s church studio giving the music some space and reverb.  Bill Crow’s bass and Dave Bailey’s drums are miked to perfection, and on my sound system it sounds like the fellas are in my room.  Amen and amen.  So where did I find an album in such great condition, anyhow?

After a cross-country drive originating in Ohio, my friend and I arrived at our destination of Salt Lake City, Utah.  An avid thrifter, my friend found a thrift store in town, so we checked it out.  I searched for the record section and eventually found two and a half stacks of records in the back corner of the store.  I didn’t expect to find much, it being Utah and all.  Buried among the Lawrence Welk, Percy Faith, Ray Coniff, and other typical thrift store vinyl detritus, I was shocked to find this record as well as two other solid jazz albums.  For only 50 cents, I felt like I was robbing the store.  Once I got home and played the album, I knew I had robbed them.  For being my first time in the state of Utah, this is the kind of souvenir I like to have to remember my time spent there. Luckily, the “rebirth of vinyl” craze hasn’t struck out there yet (I was at a thrift store that thought it was ok to charge $5.00 for a record! The nerve!).  Thanks, Salt Lake City!