They say that imitation is the sincerest form of flattery, which in this case means that Verve Records paid Columbia Records a huge compliment by naming their album similarly to Miles Davis’ 1961 album ‘In Person Friday And Saturday Nights At The Blackhawk’.  Like Miles, Tjader was recorded over two nights, the best of which was pressed onto a single record.  Saturday night went on side 1 while Sunday night on side 2.  According to the liner notes, Sunday night’s music was taken from the final two sets after most of the people in the club had left for the night, making things particularly relaxed.  Cal Tjader’s quartet, sticking strictly to straight-ahead jazz, is at home (literally and figuratively) and stays right in the pocket on each number.

“222 Time” is an original by Cal himself, written in honor of the bar next door to the Blackhawk.  Apparently, the cozy Blackhawk couldn’t house both Tjader’s group, the audience, and the recording equipment, forcing famed engineer Wally Heider to set up shop in the back room of the 222 Bar.  The 222 must have been a groovy little spot, because Tjader’s tune is a groovy little thing.  It sounds like a late-nite radio show theme.  Tjader’s crystal-clear vibes shimmer and simmer right along, with strong support from newly minted bassist Fred Schrieber.  Having worked with such West Coast jazz luminaries such as Barney Kessel, Pete Jolly and another vibist by the name of Terry Gibbs, this album was Schrieber’s national debut on the jazz scene.  For a newbie, his sound and technique is rather distinguished.

Another new face in the group was drummer Johnny Rae, who was also a vibes player like Tjader.  Pianist Lonnie Hewitt was the only hold-over from years past.  His bluesy, laid-back playing perfectly matches Tjader’s own cool-styled style of playing.  Cal Tjader has long been my favorite vibraphone player mostly because of his paired-down, “less is more” mode of playing.  His economical style coupled with his unique clear-toned sound is downright delicious.  Like cold water on a hot day.  Cal Tjader, the middle-weight champion of the vibraphone.

The second side opens with Benny Golson’s original tune “Stablemates”, which finds the Tjader 4 firmly in the pocket.  There’s no “look at me!”, bang bang bang playing here; it’s late-nite jazz as can only be played in an empty, dark and smokey club.  Hewitt briefly throws a bit of “Summertime” into his solo before going about his business.

The rest of the music on the album is much in the same vein, with Tjader’s cool vibes juxtaposed with Hewitt’s earthy but still relaxed piano.  Schrieber gets some time in the spotlight on his original tune “Fred’s Ahead” in addition to numerous solo spots on other tunes on the album.  Altogether, this album is a great document of a cohesive small jazz group playing in the intimate setting of a hole-in-the-wall jazz club in the middle of the city.  It’s a great album to put on and just relax.

The critics differ, as is often the case.  Russ Wilson liked it, calling it “A good, unpretentious, highly listenable album.”  Another Wilson begged to differ.  Writing in the jazz almanac ‘Down Beat’ in 1962, John Wilson wrote that “Schreiber comes in for an occasional solo”, but this doesn’t save the album from being monotonous and bleh.  He finishes with this chestnut: “None of the soloists is sufficiently distinctive to raise the set out of an anonymous although generally pleasant rut.”  A generally pleasant rut?  Yikes.  Fred Schreiber decided to take the high road by writing this letter to ‘Down Beat’ the next month:  “Mr. Wilson was very fair in putting down Cal and the other guys in the group, but I really think he should have listened to me more carefully.  Evidently he did not listen closely to my angular, probing lines, and I am sure that not once did he take note of my relentless throbbing beat.”  Touche. 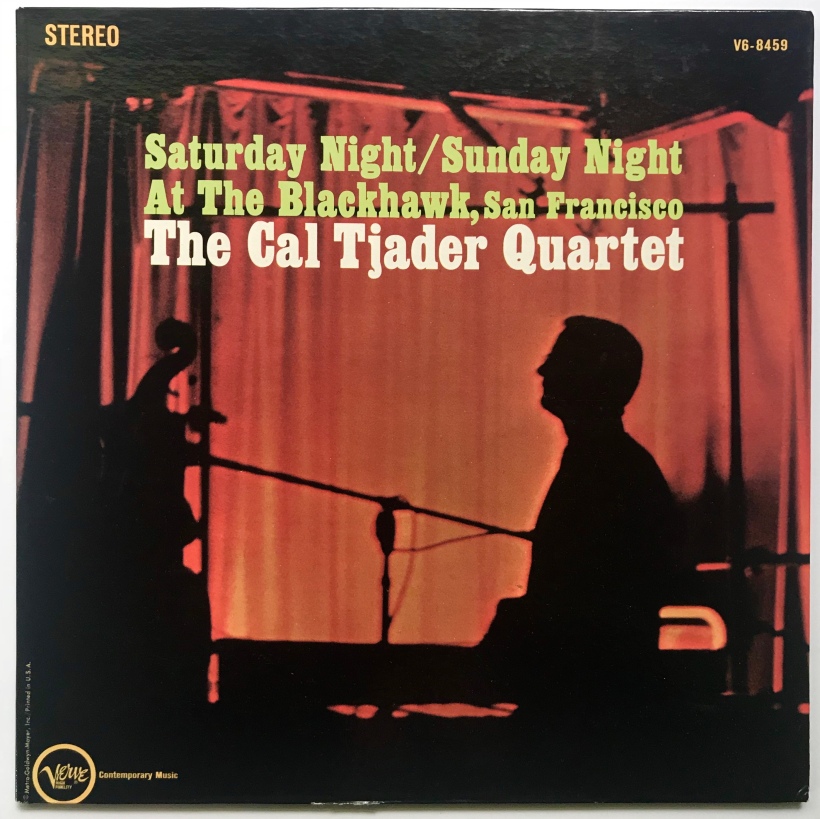 Out of Tjader’s many albums recorded live in the environs of the Blackhawk (he made like seven), this album has arguably the best cover art.  Photographer Pete Turner captured Tjader in a pensive moment onstage, surrounded by the recording microphones.  It’s a great shot, in warm color.  The late-nite vibe of the music is perfectly captured by this photo and promises the buyer that some good jazz is on the grooves of the enclosed record.

So why a ‘B’ rating and not higher?  The font, typeset, and title ruins the whole thing.  The font is rather unattractive and blocky, the type is awkwardly sized.  It’s not big, it’s not small; it’s just… there.  The green color isn’t terrible, but it’s just… there.  And what a mouthful of a title.  I’m all for the recognition of San Francisco, but was it really necessary to throw it in the title?  The placement of the title artistically and aesthetically all wrong, too.  One of the main rules of art is to never put your subject smack in the middle of the picture.  That makes for a boring, unimpressive artistic statement.  The photographer knew better than to place Tjader square in the middle of the picture, so why the art director at Verve thought it was cool to put the type in the middle is baffling.  Even without changing the font or the colors, the cover could have been saved by placing the type lower and to the left.  Something.  Anything!  Maybe I should lower the grade even more…

It’s a gatefold album, so the liner notes are on the inside, with pictures.  Well, picture.  Fancy, right?  With Tjader having made the move from Fantasy Records to Verve in 1961, we’re finally treated to an album that has recording information!  Yahoo!  Well, almost yahoo.  The album liners state that the music was recorded on 27-28 January of 1962.  Cal Tjader’s biographer, S. Duncan Reid, records the date as a week earlier.  I’m inclined to believe the hard work and research of Mr. Reid.

The picture that immediately greets the reader is another cool shot of Tjader in action, perhaps at the Blackhawk during the making of this album (although I’d hope that Tjader was hip enough to not wear a white suit jacket three weeks after Christmas.  Californian or not, there’s no excuse for this sartorial no-no).  And look!  The type was set in an attractive font and in an aesthetically pleasing position!  More evidence that they dropped the ball when it came to the cover.

The liner notes are mostly solid and filled interesting behind-the-scenes details about the musicians (see Schrieber’s bass) and the music (see after-hours fun).  However, Mr. Hadlock unfortunately falls into the linguistic trap of calling the Blackhawk the Black Hawk.  It’s an honest mistake and one that persists (with fervor in some circles) to this day.  Is it or isn’t it two words?  This issue was explored in depth and answered definitively here on another post about another album recorded by Cal Tjader at the Blackhawk.  To make matters more confusing, both spellings of ‘Blackhawk’ appear on this album.  At the end of the day, both Dave Brubeck and the original owners of the club say it’s one word; Blackhawk.  So there you are.

For the sake of completeness.

Gone are the translucent reds and blues (and greens and purples) of Fantasy’s record albums.  With Verve, it’s strictly business with jet black.  Because black is beautiful, too!  By 1962, deep-groove vinyl was out and no-groove vinyl was the new norm.  This record is in stereo, recorded to perfection by famed West Coast recording engineer Wally Heider.  The sound is dynamic and crisp, aided by the Blackhawk’s superior acoustics.  Interestingly, the stereo stage on the first side slightly differs from the stereo stage on the second side; Tjader is off to the middle-left on the first side, while he firmly treads the middle ground on the second side.  I’m thinking that the microphones were moved after listening to the first night’s performances.  The vinyl itself plays mostly quiet, the occasion crackle here and there reminding me I am in fact listening to a record.

As I mentioned at the beginning, I’ve recently returned from my annual journey back to the West Coast, this trip having spent a few days in San Francisco.  While there, I determined to cross a few things off of my jazz bucket list.  Concerning vinyl, I needed to 1.) visit a local record store, 2.) find an album or two by such native San Franciscans as Cal Tjader, Vince Guaraldi, etc., and 3.) find albums by those Bay Area natives on San Francisco’s native record label, Fantasy.  At a Berkeley record store named Groove Yard (named after the album by Wes Montgomery and his brothers), I was able to meet all three of those goals.  Aside from this album, I found another Tjader album (this time on Fantasy), a Guaraldi album (also on Fantasy), and a Wes Montgomery album (not on Fantasy, but on Riverside.  Amen), among other albums.  Score.

Another thing I had to cross off my jazz bucket list while in San Francisco was to visit the place where the Blackhawk used to be.  I HAD to.  After all, it’s my favorite jazz club, and despite having closed its doors in 1963, a pilgrimage was necessary.  And so, with my friends in tow, we made our way to Turk and Hyde in the Tenderloin District of San Francisco.  Pulling up to a parking meter and stepping out the car, the sight I saw was bittersweet.  The Blackhawk was torn down in the mid-1960’s and the space was paved over and made into a parking lot.  The only thing that indicates that the area once was the site of greatness is a plaque in the sidewalk.  Walking up and down the sidewalks was a surreal experience just the same.  Knowing that Miles Davis, Paul Desmond, Dave Brubeck, and of course Cal Tjader walked and stood in the same places I was walking and standing made everything worth it.  Before we left, I had my friends take some pictures for me from different vantage points.  They didn’t understand my reasoning, but bless their hearts they humored me anyhow. 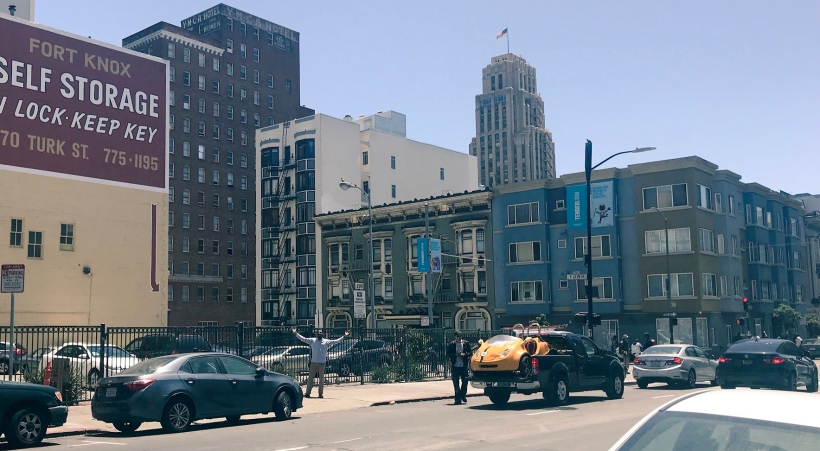 The same view in 2018.  By chance, a dark car (a Toyota Corolla) happened to be parked in the same spot as the dark car in the picture above.  How about that?  Another interesting thing:  the building behind where the Blackhawk used to be is still a storage building with a similarly humorous advertising line.

The corner of Turk and Hyde at night, 1961.  Some cool dudes are out enjoying the night, and perhaps are about to enjoy some jazz. 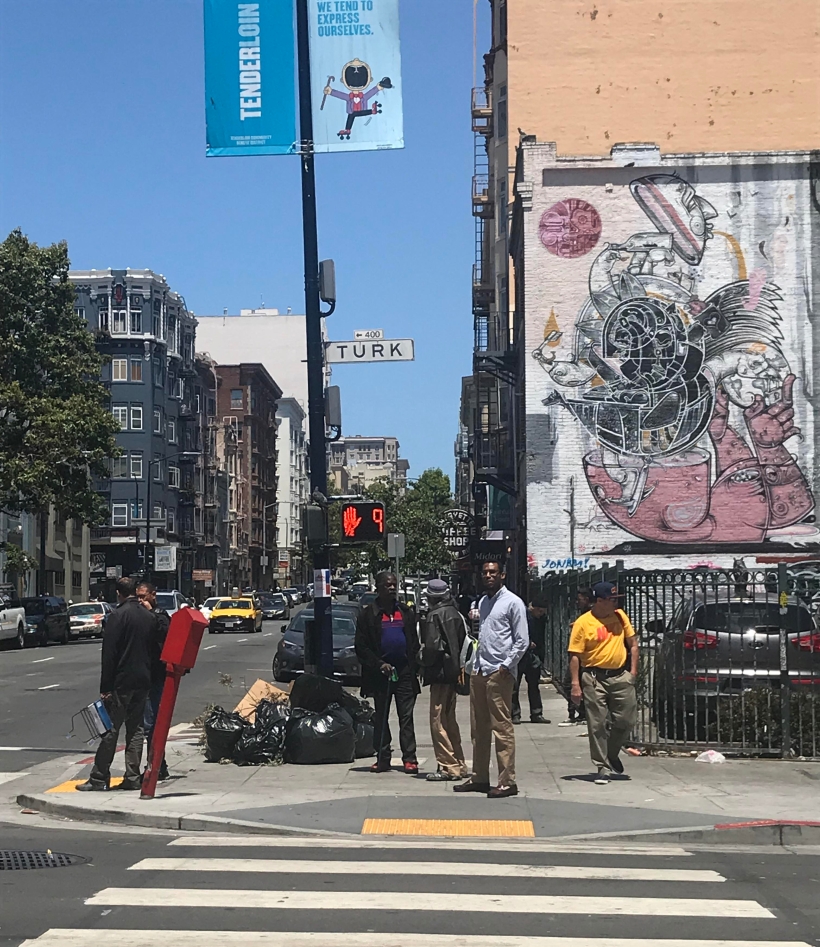 The corner of Turk and Hyde at day, 2018.  The dude in the yellow shirt saw me posing and jumped in the pictures with me.  I don’t think he knew what was going on, bless his heart.  That circular neon sign is remarkably still here fifty-plus years later.

This is what makes record collecting such a fun and beguiling hobby.  Through records, I was able to take a front-row seat at the Blackhawk for numerous sets by numerous musicians.  In doing so, I made a connection to a space that despite never having physically been there, I feel like I know it.  It’s kind of like hearing about a family member that died years before you were born, yet you feel like you personally know them anyhow.  I might have missed the Blackhawk by 55 years, but I’ve been a regular patron since 1952.