Yet again, the song I happened to profile happens to be one that identify with on spiritual level.  It was unplanned and unintentional.  This track has a laid-back, cerebral, cool feeling that directly contradicts with the tune’s title.  Oscar’s bass gets things started, with Lee and Warne’s horns floating in to state the melody.  Warne Marsh is on tenor sax, but he gets a light, hazy tone on it that matches Konitz’s airy alto.  The guitar accompaniment adds to the spare, relaxed sound of the two horns, and combined with the minor key of the song makes the track sound like a theme song to a detective show.  Konitz blows a brief two choruses, Oscar blows a little bass, then Marsh steps for an even more succinct chorus.  The two then engage in some quiet musings together, more like a cerebral conversation than staid counterpoint.  The drummer on the date, Kenny Clarke, was a drummer that could fit into almost any type of jazz session.  He was one of the first drummers to synthesis the new bebop style onto the kit, played with the likes of Miles Davis and Horace Silver, and was a charter member of the MJQ when it stood for Milt Jackson Quartet.  He truly was an adaptable musician.

The rest of the album is on this same high level.  A rather famous track from this album is ‘Donna Lee’, a Charlie Parker composition borrowing the chords from ‘Indiana’.  On this track, as on the rest of the album, Konitz and Marsh weave their horns in and out of each other, creating abstract lines and solos that were part of what jazz critics at the time were beginning to call the ‘cool school’.  Cool jazz, a term most musicians didn’t want their music to be labeled as, was in it’s heyday when this album was made in 1955, blowing in from the West Coast like a cool breeze from the Pacific Ocean.  Regardless of how Lee Konitz and Warne Marsh felt about their musical styles being labeled as cool, they were deeply associated with this style of jazz, even appearing together on a special 1958 episode of a television show called ‘The Subject Is Jazz’ that discussed cool jazz.  The two had met before on records, playing with pianist Lennie Tristano in various settings.  Writing the liners on the album, famed jazz writer and critic Barry Ulanov suggests that one listen to the album twice-  once for fun, the second time for serious study and dissection.  “There is much, then, to listen for and to hear in this collection:  tones and timing and moving solos, figures that show much craftsmanship in the planning and the execution, but most of all, as I hope I have made clear, continuity.”  Perfect and accurate.

Shot by the famed jazz photographer William Claxton, this album cover of Lee and Warne is a perfect representation of the music inside.  It’s as fun and laid-back as Lee’s laugh, as loose and casual as Lee’s unbuttoned shirt (more than one button undone, undershirt, AND hairy chest? In 1955?? Enlarged on an album cover???), as relaxed as Warne smoking a cigarette (that is a cigarette, right?).  Yet, the music is also as academic as Lee and Warne’s tucked white dress shirts, as fresh and contemporary as Lee’s club-collared shirt.  The inclusion of their saxes, casually chilling in their laps, is another great touch.  Even the album’s title, artfully placed and tastefully spare, adds to the appeal of the entire cover.  The black and white photo gives the album a timeless touch and keeps the focus squarely on the print on the cover.  This is a great piece of art.  It’s also a delightful relic of 1950’s album cover technique, featuring the heavy, glossy laminated cover popular in the first half of the decade.

Whenever I see Barry Ulanov’s name at the end of liner notes, I know I’m in for a treat.  His reviews and comments in liner notes is usually academic without being too square, thought-provoking, and accurately summarizes the music itself- all things that good liner notes should do.  The recording info is pretty complete, hitting the main points.  The top right corner has what I assume was the original price of the album penciled in, which is always cool to see on old records like this.  I’m not sure what the ‘086’ stamped at the top indicates.  Perhaps the catalogue number of a previous owner?  For being a 67-year old album, the cover and back is in spectacular shape. 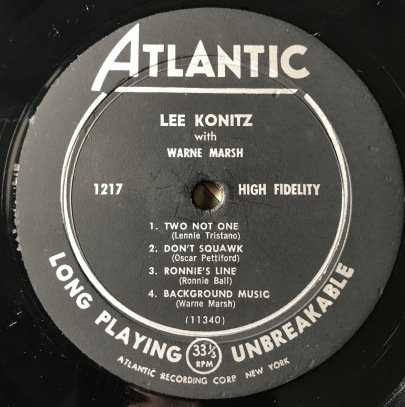 From the heavy vinyl to the severe deep-groove to the classic all-black labels, this is an original first-pressing, a la 1955.  The runnout wax has ‘AT’ etched in it, something I’ve seen in many Atlantic records from the 1950’s up through the mid-60’s.  I assume it stands for Atlantic.  The vinyl is great condition and plays relatively quietly.  A few snaps and low, unobtrusive crackles never hurt anyone.  A 60-plus year piece of vinyl is allowed that.

I could make a commercial for my local record store.  They’re like the best.  As I overheard a customer tell innkeeper a few weeks ago, it’s crazy that a small record store in northern Alabama has such a phenomenal quantity of jazz records.  There were numerous times where I almost cried upon finding certain albums, and this record was one of those times.  Casually flipping through the new arrivals of the jazz section one evening after class, I was not prepared for the heart attack-inducing number of quality records that turned up.  Lennie Tristano, Shelly Manne, Hampton Hawes, Shorty Rodgers and more, plus this album.  Original pressings, all of them, in beautiful condition.  It was as if the West Coast jazz gods had pity on this California transplant and sent all of these wonderful records to Dixie just for me.  At $10 a pop, it was easy to part ways with my money.  I really could do a commercial for this store.  But then I’d have more competition for the records.  What an ethical dilemma.