Another Brubeck rarity and oddity, with a mysterious background to match.  This 7″ 45rpm contains just one performance, a live recording of the Brubeck quartet playing ‘Don’t Worry ‘Bout Me’.  Side one contains Desmond’s solo, with Brubeck’s solo picking up on the next side.  Desmond blows two choruses, making a reference to a Christmas song and then using it to spin more lyrical lines into his solo.  Brubeck’s solo sounds like something Debussy would play if he was a jazz musician.  Due to what I assume were the time constraints of the 45rpm disc, Brubeck’s solo is edited, and Desmond is back in to close the number out.  A solid performance.

Being a rarity, though, means that there’s a backstory, and this record has one.  As far as I have found, the only information about this record comes from the liner notes of another Brubeck album.  In the newspaper liner notes of ‘At Storyville 1954’, it’s explained that this version of ‘Don’t Worry’ was selected by Brubeck himself from his unreleased tapes of their 1954 concert at the University of Cincinnati.

The groovy liner notes also talk about how this version of ‘Don’t Worry’ was only put out as a free promotional record during the summer of 1954, stating that if you didn’t grab it during that time, you’ll never see it again.  I’m sure that line made quite a few fans upset.  To read more about the promotion and read a quaint story about the ‘discovery of the female anatomy by record companies’, check out this August 1954 issue of Billboard Magazine.

Listening to the music, it’s almost immediately apparent that this is not a college recording at all.  The ambiance is all wrong, sounding much more like a nightclub than a college concert, complete with tinkling glass, hushed conversation, and intimate-sounding surroundings.  No, despite the liner notes stating otherwise, this is a nightclub recording.  In fact, listening to the acoustics of the instruments, particularly the piano, it sounds identical to the Brubeck recordings made at… Storyville, 1954.  In other words, I believe this recording was taken from the same tapes that made part of the ‘At Storyville 1954’ album.  Are you all still with me?

That album, despite its name, was made up of a hodge-podge of different recording sources.  Two of the tracks on that album came from a radio broadcast from Storyville in March of 1954, and on the second track, the radio announcer states that the radio broadcast had been on for 25 minutes already.  There was much more that the group played that didn’t make it onto the album.  Apparently, this track is one of the unissued songs from that broadcast, which is odd because the version of this song that did make it onto the album is sonically inferior to this version (it was recorded on a home recording machine, not professionally by Columbia).  Kinda makes you wonder what else is in those vaults of Columbia/Sony.  Also makes you wonder why these record companies felt the need to be dishonest.  Or was it an honest mistake? George Avakian, Columbia’s heavyweight and Brubeck’s producer, is still alive, so I suppose I could shoot him an email…

In conclusion, the backstory behind this record is that it’s not a college performance at all, but another cut from Storyville, circa March of ’54.  I have no hard evidence, admittedly, but the evidence I do have is pretty convincing.  To compare the acoustics and hear the radio announcer’s words, listen to the blues below, which comes from the same broadcast.

One thing that Avakian was telling the truth about in those liner notes is that it hasn’t been available on any format but this one since the promotion was over.

There was no cover for this little disc, just a plain paper sleeve. 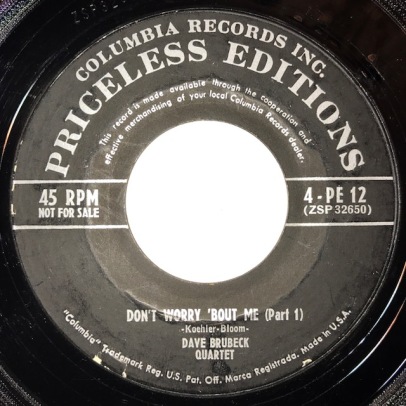 The labels clearly state that this is promotional-only merchandise, not for sale.  The fidelity is mostly good, but there’s certain frequencies where it crackles a bit.  It fades out for Desmond’s solo and fades back in on the other side.

eBay once again comes to the rescue.  I found a copy of this on eBay last year but waited too long to grab it, and it disappeared.  When I saw this one last week, I immediately grabbed it, and it came in the mail a few days ago.  The seller claimed it was Mint condition, saying that he rarely gives that rating to his records.  Yeah right.  I should’ve known something was up when he offered it for $6.00 or a better offer.  I offered $3.50 and he took it.  If it wasn’t such a hard to come-by record, I’d complain, but hey.  I got it for a deal, well within my collegiate budget, and it’s ‘new’ Brubeck.  What’s there to complain about?