After much traveling, both planned and unplanned, I am back!  While I did obtain quite a lot of ‘new’ records during my travels, here’s a favorite of mine that I got by traveling to the local record store in my own neck of the woods.

Vince’s great commercial and artistic statement and his record company’s first legit ‘hit’, this album was a huge seller in the 1960’s, and the hit single that sold the album, Vince’s original ‘Cast Your Fate To The Wind’, went on to win a Grammy in 1963, one of the few instrumental jazz tunes to make it that far.  Allmusic gives the album a rare 5 stars, with reviewer Richard Ginell positively effusive about it.  “Here is Vince Guaraldi’s breakthrough album — musically, commercially, in every which way. After numerous records as a leader or sideman, for the first time a recognizable Guaraldi piano style emerges, with whimsical phrasing all his own, a madly swinging right hand and occasional boogie-influenced left hand, and a distinctive, throat-catching, melodic improvisational gift.”  The two tracks above definitely showcase his “madly swinging right hand” and “melodic improvisational gift”.  Guaraldi was inspired to cover some of the bossa nova tunes he heard in the 1959 movie ‘Black Orpheus’ and translate them into the jazz idiom, resulting in this album.  He was among the first jazz musicians to this, and the album came out as Americans were just beginning to discover bossa nova.  The first half of the album is dedicated to the movie soundtrack, the second half to more American-centric jazz tunes.

This is one of those rare albums where each tune is a great tune, memorable in their own way.  Guaraldi’s San Francisco style comes through, but the soul is there, living up to what one musician pegged as the West Coast Red Garland.  He’s in a particularly Garlandish vein on the last track of the album, a moving rendition of ‘Since I Fell For You’.  The second tune, ‘Manha de Carnival’, to me evokes a rainy day in the city, melancholy but with some attitude.  I don’t know if there’s an actual record for this or not, but Guaraldi’s drummer on this album, Colin Bailey, deserves a special mention at least for his speedy transitions from brushes to sticks at the beginning and end of ‘Samba de Orpheus’.  Like wow.

It’s a decent cover, still in what I assume is its original shrink wrap.  The two love birds on the cover are apparently the main characters from the 1959 film ‘Black Orpheus’, which the half of the album is dedicated to, which I’m sure was helpful to the record-buying public in the 1960’s.  Fantasy Records, like other record labels in their quest to make a buck, weren’t above changing album covers to reflect a surprise hit.  When this album first came out in 1962, ‘Jazz Impressions of Black Orpheus’ was prominently emblazoned on the cover.  After Guaraldi’s tune ‘Cast Your Fate’ became a smash hit, Fantasy re-released the album at least two more times during the 60’s, altering the cover each time to showcase the tune over the actual album’s title, culminating in this version of the cover with the album’s original title buried under the ‘original hit’s name.  The album continued to sell well, so these tactics obviously didn’t hurt. 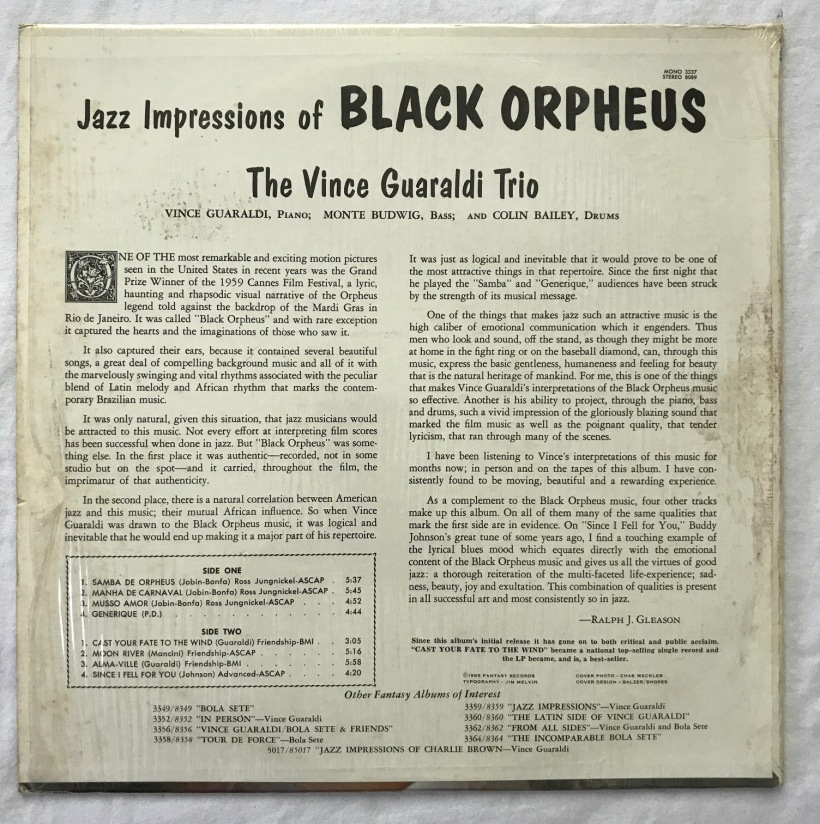 As usual, Guaraldi’s liner notes (as most jazz releases by this label) were made by Fantasy’s scholar in residence and San Francisco jazz critic/writer Ralph Gleason.  In typical Fantasy fashion, no recording dates are given.  The last tune on Side 1 was incorrect, listed as ‘Generique’ which is just a musical style.  It’s actually the bossa nova standard ‘A Felicidade’.  Note the note at the end of Gleason’s notes.  Boy they didn’t want you to forget this was a popular album, bless their hearts.

Curiously, despite this being pressed in the mid-1960’s, the album is still strongly deep groove.  Another interesting thing about this record is that it’s pressed on normal black vinyl.  Fantasy’s standard practice was to press mono albums on red translucent plastic and stereo on blue.  More study is needed, but I believe by the mid-1960’s Fantasy was pressing its albums on standard black vinyl.  The label is a holdover from the early 60’s.  All in all, it’s a 1965 pressing, still an original pressing, but not a first issue.  The record itself wasn’t in a protective sleeve, instead just sitting in the record cover by itself.  The record sounds delicious in spite of this, with the perfect amount of pops and crackles, but nothing that overpowers the music.  The fidelity is great, life-like and clear compared to the rather flat and sterile sound on the CD of this title that I’ve owned for years.  The stereo is good, with Vince’s piano front and center and the bass and drums not too far to either side in the mix.  It’s an actual trio record, not a piano with some accompaniment.

I always say this, yet each time I find something like this at the local record store back in Huntsville, I am shocked.  While perusing the ‘new arrival’ section of the jazz section, peeking from behind some Benny Goodman and Kenny G (yikes) was this album, which I immediately snatched.  The lack of a protective sleeve for the record was discouraging, but a play on the store’s record player revealed a record in almost perfect shape sonically. For $8, I bought it without thinking twice.  A fellow Californian in Alabama?  I couldn’t pass him by!