After a brief hiatus due to finals and end-of-the-year projects and assignments, I am back!  What, you thought the ‘college’ in ‘College Jazz Collector’ was for decoration?

This album is noteworthy for a few reasons.  This marks the first appearance of Eugene Wright on bass, taking over for Norman Bates and staying with Brubeck constantly until the group’s breakup in 1967.  His appearance also makes this the first Columbia album with the ‘classic’ quartet, the name given to Brubeck’s quartet line-up from 1958 thru 1967.  Another reason this album is rather special is that it contains what many consider to be Paul Desmond’s greatest recorded solo.  ‘Tangerine’ was one of Desmond’s favorite songs, and his solo on the tune is pretty spectacular.  To quote Mr. Doug Ramsey from his book on Paul Desmond,

In ten solo choruses, he soared from thought to connected thought, swinging firmly and incorporating whimsical polytonal intervals that must have had Brubeck smiling.  Following a Brubeck solo full of dynamics, Desmond launched four more choruses that included a stop-time section and an exchange of four-bar phrases with Morello.

Desmond’s solo is really tasty and full of inspiration, as well as humor.  It’s full of Desmond devices that made his solos interesting, using the same rhythmic motif with different notes or quoting different songs.  In the course of his solo, he references “Isn’t It Romantic”, “Thanks For The Memories”, and even a bit of Thelonious Monk’s “Rhythm-a-ning”.  He then proceeds to use “White Christmas” and “La Cumparsita” while trading fours with Morello’s brushes.  Both of those last quotes get Brubeck laughing, but the “La Cumparsita” bit, played in response to Morello’s rhythm on the drums, not only makes Brubeck laugh, but we get treated to his snort!  The snort gets Brubeck chuckling and there’s a ripple of laughter from the audience, prompting somebody to calm everyone down (in English, no less).  I guess the Columbia execs figured the music itself warranted the inclusion of the track, snort and all.  The stop-time with Desmond soloing exposed is beautiful.  Desmond was famous for not sounding like Charlie Parker (he once said that he became the ‘whitest white musician’), but his uniqueness made him one of the more interesting soloists on the alto sax.

Brubeck’s comping is quiet and supportive, filling in the cracks and often compliments Desmond’s solo.  Brubeck’s solo is another story.  It begins light, and end light, but in the middle he plays some rhythmic and dissonant music in a repeated figure.  I don’t know who the person is that seems to jolt Brubeck out of it, but it was a stark contrast from Desmond’s fluid solo.

The great Eugene Wright’s walking bass holds the fort down throughout the song, especially during Brubeck’s solo, and on another track on the album he gets a whole song to feature his playing.  All in all, this is a great track from a great group.  The rest of the album is swinging, too, and ends with a long drum feature for Morello.

It’s almost funny when you think about it.  They’re literally in Europe, both on the cover and on the record! The great cartoonist and illustrator Arnold Roth did the artwork.  Roth was a close friend of Desmond’s, and Roth’s artwork graced numerous Brubeck albums throughout the 1950’s and early 60’s.  The artwork was always humorous and whimsical and made for great art.  It’s also kinda neat that they’re on the map of Europe; it makes for an engaging cover.  Also, I don’t know if it’s just me or if it was intended, but I think it’s rather interesting that Eugene Wright is put in Spain by himself.  Now, hear me out on this.  The Moors, from north Africa, briefly controlled Spain a long time ago, and I wonder if Roth knew that and put Wright there on purpose…

The liner notes, done by Dave Brubeck himself, are rather interesting as liner notes usually go.  They’re done as a conversation, and Brubeck gives a lot ‘behind-the-scenes’ details and information about not just this record, but of the whole trip.  There’s the story about how Desmond lost and then retrieved his typewriter, and for Brubeck fans there’s the tantalizing disclosure about more live tapes of the Brubeck Quartet locked in the vaults somewhere, waiting to be released.  Both the cover and the back are in great condition, the whites still mostly white and the front suffering from slight ring-wear.  Vintage original price tags are always a plus, in my opinion, anyhow.  They can also be painful.  Seeing that in the 1950’s somebody bought a record for under $3.00 while I bought it for $10 can be painful.

The sound is pretty great, with the occasional crackle and slight evidence of a worn record, mostly evident in Paul’s sax.  The spacing of the instruments is a bit questionable, though.  Paul’s sax is all the way on the right while Dave’s piano is on the complete opposite side of the stage, with the bass and the drums occupying the center stage.  This kind of stereo spacing was common in the early days of stereo, but eventually was corrected.  Modern-day stereo cuts of this track have Paul’s sax in the middle and everyone else evenly spaced throughout the mix.

The labels are original stereo 6-eyes, but not deep-groove, indicating a post-1961 pressing.  The runout matrix number confirms this; the first side has 1-AG and the other side -2AD, which signify a second tape was used for the second side and both sides were well into their 20th pressing.  The relatively late stereo catalog number of this album (CS 8128) compared to the mono version of the album (CL 1168) also points to the fact the stereo edition came out a few years after the mono edition.  Which brings us to an exciting edition of ‘Mono Vs Stereo’!

I always thought it odd that Columbia, one of the more powerful record companies during the 1950’s, was rather late to the stereo party.  Despite recording albums in stereo as early as 1957, they didn’t seem too interested in pursuing the market until later in the 1950’s.  As a result, they ended up playing catch-up with some of their titles, and this album is an example of that.  Columbia’s stereo series began with 8000, so it’s reasonable to assume that the stereo edition of ‘In Europe’ was the 128th stereo album pressed, from at least 1958 on.  Being 128th, it probably didn’t show up until the early 60’s.  The mono version of the album was released in 1958, and it differs from the stereo album in more ways than sound.  Luckily, I just happen to have a mono copy. 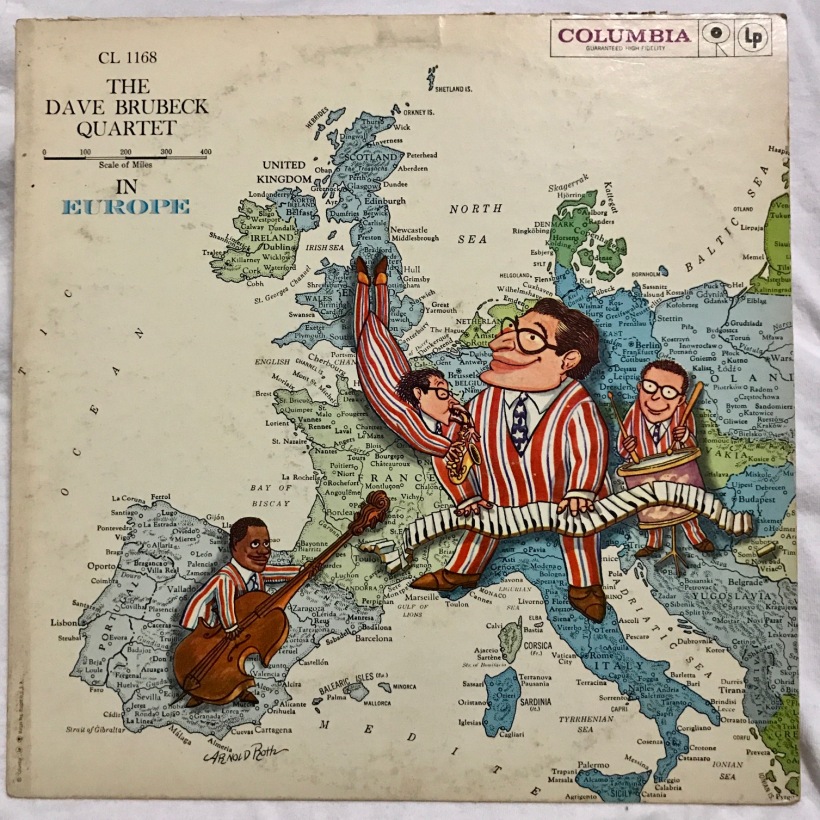 Gone is the stereo banner at the top of the album, instead left blank.  The Columbia ‘eye’ on the mono album is white with a black center, while the stereo CBS ‘eye’ is just the opposite with a white center surrounded by black.

The absence of the stereo banner on the bottom of the liner notes plus the addition of the mono info box moves the print around, and apparently the American Map Company wasn’t in New York yet in 1958.

This is all fine and dandy, but the music is where the rubber hits the road, and that’s the most interesting part of this whole thing.  There are numerous differences in the music itself, some attributable to editing, and others attributable to the different sources or sound engineering of the stereo tape vs the mono tape.  For instance, right off the bat at the beginning of the record, when Brubeck introduces the first tune from the stage, the mono version has him upfront and center in the mix.  The stereo version has Brubeck sounding like he’s speaking from across the auditorium.  On the first track, the audience claps and laughs at a few points during the song.  The stereo track reveals only a slight rumble from the audience.  Then, where Desmond’s solo continues for another chorus on the stereo cut, there’s an edit that omits this last chorus, instead jumping straight to Brubeck’s solo.    This difference in versions is especially glaring on ‘Tangerine’.  After listening to the stereo version all my life (as that’s the only version available on CDs and digitally), I was shocked when, upon listening to the mono version, there was a jarring edit in Desmond’s solo, just as he was cooking.  It omits the second to last chorus of Desmond’s flight of fancy, jumping right to his last chorus.  At first I couldn’t figure out why the engineer made this edit in the tape, but I think I have the answer.  In that chorus that was edited out of the original release, Desmond, in the midst of an inspired line, squeaks some notes and then lands on a honk, before finishing the chorus with a bluesy lick, eliciting a confirmatory “yeah” from Brubeck.  Desmond, always a perfectionist, probably requested that it be taken out, which was done on the mono tape, but didn’t make the transfer over to stereo, when Columbia was under new management.  Despite the ‘flaws’, it makes for a riveting solo, and almost enhances the solo by demonstrating how you can turn lemons into swinging lemonade.  Here’s the mono version of ‘Tangerine’, and you can find the edit at about four minutes and five seconds in.  The difference from stereo to mono is like night and day, and that’s not taking into account the difference in vinyl quality.  What do you think?  Should live music always be in stereo, or is there merit in a mono live recording?

For a record store in northern Alabama, I’m constantly surprised by the jazz albums that show up in the ‘new arrivals’ section of the jazz area of the local record store.  Heck, the fact that they even have a ‘new arrivals’ in the jazz section is note-worthy.  That’s where I found the stereo edition of this album a few weeks ago.  Three years earlier, my best friend gifted me the mono edition for Christmas, and I always wanted to compare it to the stereo vinyl album to see if it had the edits on it, too.  When I saw this album in the store, I grabbed it immediately.  The $8.00 price tag made it easy.  This record store always leaves me in an ethical dilemma:  Do I give it a positive review online, thus alerting the public about the gems found there and thus creating more competition for these records, or do I just keep it to myself while keeping business for the owner’s lower than it possibly could be?  Decisions, decisions, decisions.